Thanks to constant growing business performance, Phat Dat Real Estate Development Corporation (Stock Code: PDR) is positively restructuring its capital, including continuous loan settlements. As a result, short-term and long-term debts is expected to narrow down to VND 1,018.9 billion by the end of July 2021.

Phat Dat showcases its impressive speedy development and sustainable internal resources in all business aspects, especially in the first 3 years of implementing the New Era strategy (2019-2023). Typically, in 2019, PDR’s net revenue exceeded VND 3,400 billion, and pre-tax profit reached over VND 1,105 billion, up 45.8% YoY. In 2020, despite the economy and market greatly affected by the Covid-19, net revenue was over VND 3,911 billion, and pre-tax profit was at VND 1,540.22 billion, increasing by 15% and 39.3% YoY, respectively.

At the end of 1Q2021, Phat Dat remained in the Top 15 most profitable real estate enterprises in the quarter with net revenue of VND 586.1 billion. Profit before tax and profit after tax reached VND 314.93 billion and VND 251.07 billion, respectively, equivalent to an increase of over 60% YoY.  Simultaneously, the PDR ticker, as well as PDR’s market capitalization, also continually thrived, becoming a positive contributor to the overall gain of the VN-Index. As of 14th June 2021, PDR shares were traded at VND 91,400/share, up 118% compared to the beginning of 2021, elevating PDR’s market cap to more than VND 44,490 billion or USD 1.93 billion. 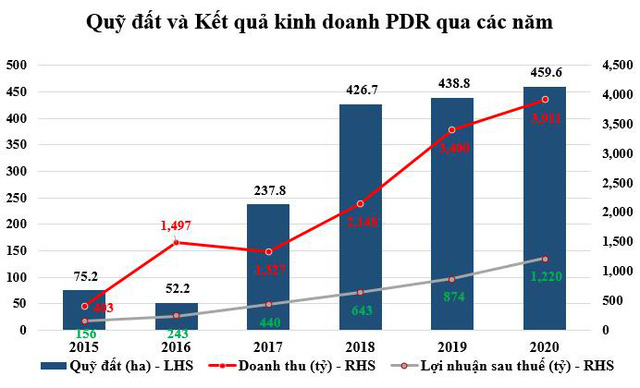 PDR’s Landholdings and business performance over the years

The strong cash flow with such impressive revenue and profit performance has enabled Phat Dat to restructure its loans, and expectedly, the total debts will be at about VND 1,000 billion by late July 2021.

Thus, it is estimated that the total actual debt obligations of PDR will be only VND 1,018.9 billion by the end of July 2021.

Meanwhile, PDR’s equity is estimated at VND 7,119.34 billion at the end of July 2021. When subtracting the minority interest, the remaining equity is VND 5,575.24 billion; thus, the estimated debt-to-equity (D/E) ratio at 18.2% is well below the average 77.2% D/E of same-scale businesses in the real estate industry.

With a high reputation in the market and such a low D/E ratio, Phat Dat is proactive in mobilizing new funding sources and increasing its total debts to finance projects that bring about high profitability and stable cash flows in the coming time.